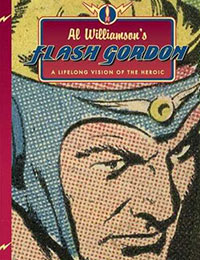 Al Williamson's Flash Gordon, A Lifelong Vision of the Heroic Average 5.00/5 - out of 1 total votes.
Follow 0 Followers
Read from beginning Read the latest

At 256 pages, Al Williamson's Flash Gordon: A Lifelong Vision of the Heroic collects all the major works of the artist featuring Flash Gordon - Williamson's the legendary King Comics stories from the 1960s, the 1980 adaptation of the Universal Flash Gordon motion picture, and the Marvel Comics miniseries of 1994. In addition, the volume features Williamson's Flash drawings done for commercial illustration and prints, his assists on the Flash Gordon comic strip, a variety of images for amateur publications, and a selection of largely unpublished images spanning his interest in the character from childhood to the conclusion of his career. Available in Hardcover and Softcover editions.