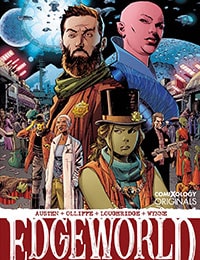 Local people are disappearing and it's up to Killian Jess, Magistrate of Rush, and his odd group of friends to find out what's going on. But they've got freak sandstorms, a hostile military government and the aftermath of a planet-wide war to wade through in order to reach the answers they seek. Edgeworld marks the surprise return to comics of Dreamworks television producer Chuck Austen, the controversial X-Men and Superman writer, partnering with his good friend, long-time Marvel/DC artist Patrick Olliffe.