Fire and Water: Bill Everett, the Sub-Mariner, and the Birth of Marvel Comics Comic 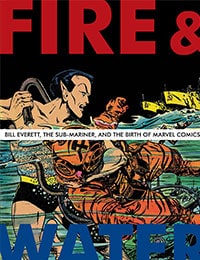 70 years ago, a new publishing company named Marvel Comics stuck its toe into the first waters of the comic book industry. Before they became a pop culture powerhouse publishing famous superheroes like Spider-Man, the Incredible Hulk, and Iron Man, Marvels first ever comic book featured a daring new anti-hero named the Sub-Mariner, created by legendary artist Bill Everett. 70 years later, Everetts watery creation continues to be one of the pinnacles of the Marvel Universe of superheroes, as attested to by its recent option as a major motion picture. Bill Everett invented comics first anti-hero in 1939; an angry half-breed (half-man, half sea-creature) that terrorized mankind until uniting with the Allied Forces to conquer fascisms march across Europe during World War II. But the reasons to celebrate Bill Everetts monumental career in comics books dont stop with his water-based hero. Everett was a master of many comic genres, and was one of the pre-eminent horror comic-book artists in the 1950s (before government and societal pressures led the comics industry to censor itself with the imposition of the Comics Code Authority), producing work of such quality and stature that he ranked alongside the artists who produced similar material for the justifiably lauded EC Comics.