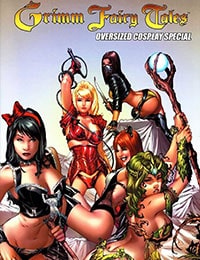 When Baba Yaga gives a writer the unusual power to control those he writes about, the incredible gift proves to have consequences far worse than he could have imagined. Meanwhile Baba Yaga has long sought control over the nexus and Earth itself and she may have finally found the one item that will reveal the secrets of the universe to her, one which will allow her to stay one step ahead of all her enemies. This issue features some of the top cosplay ladies in the industry and takes place during one of the biggest conventions in the Southwest: The Phoenix Comicon!
Note: The Queen of Spades, Sela and Alice Liddle only appear in the background on an alternate cover. Calie, the Goblin Queen and Princess Tiger Lily appear only as cosplayed characters on the cover.