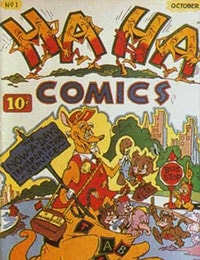 Ha Ha and Giggle were anthology titles that targeted a young audience who were read to by adults, older friends, or siblings, or were just beginning to read themselves. Features changed with each issue, but talking animals dominated the books. The stories were simple with a single theme and employed mostly visual humor. Human faces were rare.
Published from October 1943 to January 1955 with 99 total issues numbered 1- 99.
Continues as Teepee Tim (1955 series) #100-102.