Is This Tomorrow Comic 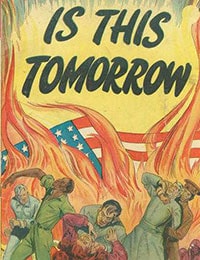 In 1947 the Catechetical Guild Educational Society published 'Is This Tomorrow: America Under Communism!' The comic was meant to be an educational warning against communism for its young readers. The story was printed in color and is about Communists infiltrating all of American society including the Speaker of the House. The President and the Vice-President are both killed and the communists take over quickly. Food stamps are given to new party members and those who don't have them die of starvation. The communist take over schools, banks, food supplies and more.
A young boy rats his parents out to a communist party member and his father gives him to the communists 'Because you already have his mind, you might as well have his body'. The foreword and afterword are those of caution and of resilience in fighting the communists. The comic ends with the Ten Commandments of Citizenship.
The comic had several runs and was either sold or given away for free to almost four million readers.