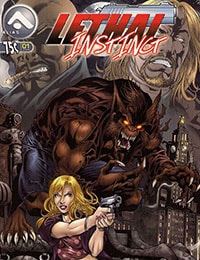 Outlaw Frank Aaron, a police officer in Blackstone City, carries a curse in the form of severe Lycanthropy - Frank is a werewolf. Sharing the secret of his plight with Dr. Carl Sanchez and his homicide partner Daniel Whitman, Frank hopes to control or end his curse in order to join "The Special Division" which deals in superhuman and paranormal cases to help those like himself.
Frank Aaron is a cop in Blackstone with a dark secret as he does his job hoping he does not do more harm than good. Frank and his partner, Dan Whitman, are assigned to a stakeout of a deal between unknown characters.