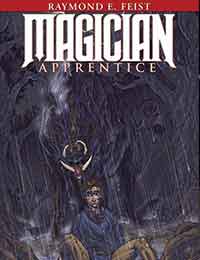 Pug and Tomas are two kitchen boys with big dreams of becoming heroes in the fantasy world of Midkemia -at least until Pug finds himself trapped in a terrible storm and being chased by a savagely angry boar. It is at this point that he is rescued by a servant of the magician Kulgan and introduced to the ways of magic - a path he had never considered for himself.
But elsewhere in Midkemia, an elven tracking party discovers that a strange army is scouting the remote areas of their world - and vanishing without a trace once they are finished!