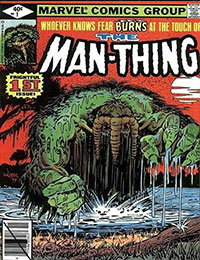 The government recruits Dr. Oheimer to capture the Man-Thing and restore its intelligence, so they can try to extract the Super Soldier serum recipe from his mind. As told in a flashback, Ted Sallis had recreated that serum and injected himself with it while trying to flee from thugs. Crashing into the swamp..the mucky waters interacted with the serum and turned him into the mindless Man-Thing. Dr. Oheimer does indeed capture Man-Thing and is making progress in restoring his intelligence until...real government agents find out about the plan to recreate the serum and send soldiers in to rescue Dr. Oheimer from the fake government agents. The soldiers think the Man-Thing is a monster and accidentally shoot Dr. Oheimer, the only person who knew of Man-Thing's submersed intelligence. Man-Thing is enraged, attacks the soldiers and returns to the swamp.