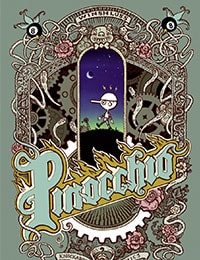 Winner of the Grand Prise at France's Angouleme Comics Festival in 2009. In this dark rendition, a greedy Geppetto builds Pinocchio as a metallic weapon of war, while Jiminy Cockroach is a homeless squatter living the good life in Pinocchio's skull. Exquisite drawings by celebrated cartoonist Winshluss bring to life a rich tale of greedy fools, lust, sadness, redemption, and hope. Winshluss has perfected the wordless comic with artwork primarily done in pen and ink, and watercolor which switches to paint for larger splash panels.