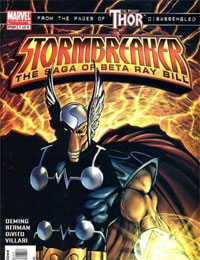 Beta Ray Bill jumps out of the pages of the now classic THOR series and finds himself the sole survivor of all that was Asgard. Will Beta Ray Bill escape the end of one world only to face his own end?
Stormbreaker: The Saga of Beta Ray Bill is a mild crossover into Marvel's Avengers: Disassembled storyline, in which it somewhat continues Thor: Disassembled that saw the total destruction of Asgard and even Thor's "death". Written by Michael Avon Oeming with artwork by Andrea DiVito, this tale delivers Beta Ray Bill's point of view to the point where he actually sees how Ragnarok has effected Asgard. This TPB collects Stormbreaker isses 1 - 6.