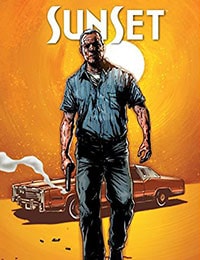 162 pages! SOMETIMES ALL YOU CAN DO IS GO OUT WITH GUNS BLAZING. In the noir tradition of Chandler and Spillane comes SUNSET, a two-fisted tale of revenge and redemption. On the surface, Nick Bellamy looks like any other veteran retiree left behind by a modern world. In reality, Nick is a former enforcer, who stole a fortune and years of freedom from his former mob boss. Now, in the twilight of his life, Nick will lose everything he cares about except two things: revenge and the chance to die with his guns blazing. Writer CHRISTOS GAGE (Avengers Academy, GI Joe: Cobra) and artist JORGE LUCAS (THE DARKNESS) promise to hit hard with Minotaur Presss first original graphic novel that will make and make you forget all about your Prius and organic whole-grain trans-fat-free diet.