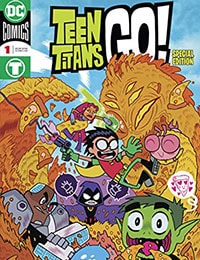 In Teen Titans Go! To the Movies, it seems to the teens that all the major superheroes out ther are starring in their own movies-everyone but the Teen Titans, that is! But de facto leader Robin is determined to remedy the situation and be seen as a star instead of a sidekick. If only they could get the hottest Hollywood film director to notice them. With a few madcap ideas and a song in their heart, the Teen Titans head to Tinsel Town, certain to pull off their dream.