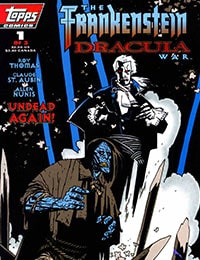 In 1796, while Napoleon Bonaparte's troops ride roughshod over France's foes, Dracula gains vampiric sway over a selfish young woman named Mirka, the daughter of Count Bogdan, in order to increase his earthly power by marriage.
Realizing belatedly that Dracula is one of the undead, Bogdan leads a handful of soldiers into his castle, intending to slay the vampire. But Bogdan's men are instead slain by Dracula and Dracula has Bogdan's newly-undead daughter slay her father.
Meanwhile, having come from the Arctic into the Transylvanian Alps in search of a way to make himself a mate, the Monster created by Victor Frankenstein has been befreinded by a girl named Irena. When French troops ransack her village, Irena convinces him to defend it against the brutish soldier called "Monsieur Massacre". But the Mosnter must give way when their leader, the magician Count St. Germain, holds the girl hostage...