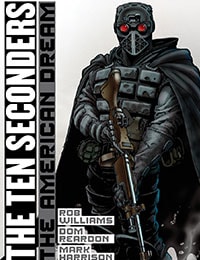 Super-powered action! Earth, the near future. Humanity has been all but destroyed by a race of super-powered beings, who initially offered to help mankind, but really intended to rule them. Those that fought back against the tyranny of the ‘Gods’ were nicknamed the Ten-Seconders – their name based on the average life expectancy of those brave enough to battle to face of against such powerful opposition. This is their story of resistance. THIS VOLUME INCLUDES THE STORIES: THE AMERICAN DREAM (2000 AD progs 1469-1479) MAKE BELIEVE (2000 AD progs 1578-1588)