The Wicked + The Divine Comic 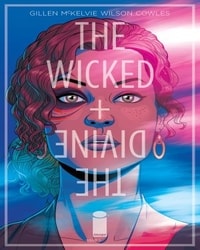 Ongoing series by writer Kieron Gillen and artist Jamie McKelvie about a world where numerous gods get reincarnated into young men and women every 90 years, known as "The Recurrence", but only live thereafter for two years. While they're on earth, these gods behave like pop stars thus are celebrated and worshiped like teen idols, but are also feared and hated by others. Among these 12 young gods are Amaterasu, Baal, Baphomet, Inanna, Luci (aka Lucifer), Minerva, Sakhmet, Tara, and the Morrigan. Then there is a mysterious old lady called Ananke, the "God of Fate" and caretaker of the young gods, and Laura, a normal teenager who admires these young gods and would do everything to be one of them.