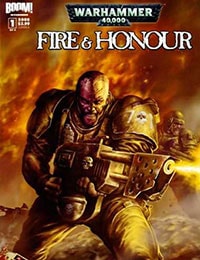 Meet the Imperial Guardsmen of Blazer Company, garrisoned in a tactical position known with typical soldier's irony as Paradise City. As the Tau attack, the regiment's famed Hellhound tanks fry Tau warriors and mortars drop explosive shells on their heads. In the midst of the battle, the fate of war could tip in the Imperial forces' favor - or tip towards betrayal and annihilation!