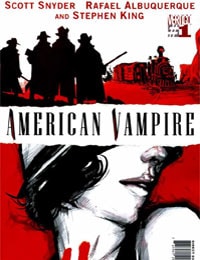 Witness the birth of a brand new species of vampire in this new ongoing series that begins with five extra-sized issues featuring back-to-back stories by exciting new writer Scott Snyder and the master of horror himself, Stephen King! When notorious outlaw Skinner Sweet is attacked by an old enemy (who happens to be a member of the undead), the first American vampire is born... a vampire powered by the sun, stronger, fiercer, and meaner than anything that came before. Plus... Pearl Jones is a struggling young actress in 1920s Los Angeles. But when her big break brings her face-to-face with an ancient evil, her Hollywood dream quickly turns into a brutal, shocking nightmare. “Big Break” July 1925. Thirty miles east of Los Angeles, an automobile containing numerous devoured bodies meets a hooded figure in the desert. The hooded figure casts the bodies into a ravine. One of the bodies is Pearl Jones, who is barely alive. Three days earlier, aspiring actresses Pearl Jones and Hattie Hargrove return to their shared boarding room after a day of work on the set. They notice a man (Skinner Sweet) who has been hanging around for the last three days. Later, as Pearl heads from her night job to her morning job, musician Henry Preston meets Pearl and eventually gets her to agree to a date. Back at her acting gig, Pearl gets to stand-in with movie star Chase Hamilton, who invites her to a party being thrown by big-time movie producer B. D. Bloch. On their way to the party, Pearl and Hattie are harassed by Sweet, who is sitting by the pool again. Sweet advises Pearl to skip Bloch’s party and says he’s in town to “finish a bit of business” with Bloch. At the party, Mr. Hamilton takes Pearl into a room and presents her to Bloch and his associates, all of whom are vampires. The story ends with Pearl being attacked by several vampires. “Bad Blood” The second half of the comic is told from the perspective of Will Bunting, a writer living in 1925 and recounting events that occurred in 1880. A young Bunting is present as the outlaw Skinner Sweet is being taken by train to be hanged. Sweet and his associates, Ronnie Jeeks and the Blackmouth Twins, had robbed the bank of the sun-sensitive Mr. Percy, whom retained the Pinkerton Agency’s services to capture Sweet. Also on the train are: James Book, the Pinkerton agent who captured Sweet; Agent Finch, Book’s boss; and Felix Camillo, a young, nervous deputy whose father Hector had turned in Sweet. After a daring train wreck and escape involving his gang and a peppermint stick, Sweet tells Book that he sent Book’s fiancée a “really nasty” vintage bottle of wine. Mr. Percy confronts Sweet and company who pepper him with gunfire to no effect. Percy, a vampire, bites Skinner, Skinner pushes him off, shoots him in the head, and in the process, a fateful drop of blood from Percy lands in Skinner’s eye. Shortly thereafter, Percy slashes Skinner’s throat with his razor-sharp fingers. The survivors leave Sweet for dead as a smile creeps across his face.