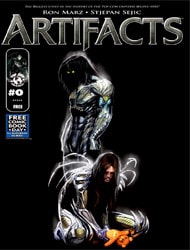 Originally, Artifacts was set to be a 13 part crossover event involving all the popular Top Cow characters in a universe changing event. After the arc's conclusion, the series continued as an ongoing title, mostly serving as an anthology series for the Top Cow characters that lacked their own books. Ron Marz wrote the majority of the series but, toward the end of the series' run, issues were penned by past winners of Top Cow's annual talent contest. Artifacts concluded after 40 issues.