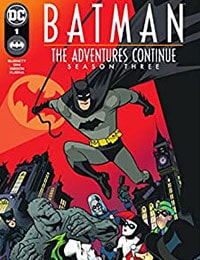 Alan Burnett and Paul Dini return once more to the world of Batman: The Animated Series! Someone is targeting the Muscle now that he’s locked up in Blackgate Penitentiary. With his deep ties to the criminal underbelly of Gotham, the worst villains are calling for his head before he turns them over to the police! Batman will need to protect him, but can even the Dark Knight figure out where the next attack will come from?