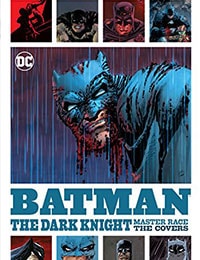 The unforgettable world of Frank Miller's Dark Knight saga—reimagined by the comicsindustry's greatest artists with a collection of variant cover art—is brought to life in this hardcover title, BATMAN: THE ART OF THE DARK KNIGHT: MASTER RACE. No comic has shaped the future of superhero storytelling like Frank Miller's THE DARK KNIGHT RETURNS. Even 30 years later, the iconic story of an aged Batman in a strange dystopian future still sets the gold standard for what a comic book can be.So when Miller's highly anticipated third installment of the series, BATMAN: THE DARK KNIGHT: MASTER RACE, hit comics shops, it was accompanied by DC's most ambitious variant cover program ever—over 150 variant covers produced by an all-star roster of artists, from veteran industry legends to the hottest rising stars. This special edition collects all the covers, variant covers and mini-comic covers from MASTER RACE, along with never-before-seen sketch material and an introduction by longtime Miller collaborator and Dark Knight saga inker, Klaus Janson.