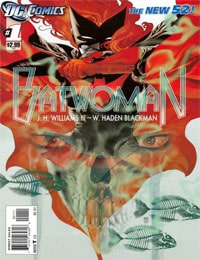 Batwoman is a vigilante in Gotham City who acts as female counterpart to Batman. The Golden Age version was crime-fighter Kathy Kane who fought with her side-kick Batgirl and romantically pursued Batman. In the modern era her legacy is taken up by the army brat Kate Kane, a lesbian expelled from West Point. Like her Golden Age counterpart, Kate Kane's Batwoman is a wealthy socialite and has a sidekick; her cousin and former Teen Titan Flamebird. She has been involved with the Batman Family, Batman Incorporated, the Female Furies and Spyder. Katherine Kane is a proud lesbian and has been romantically involved with several women, including Renee Montoya, Mallory Kimball and Maggie Sawyer. She is also Jewish. Batwoman was created by Bob Kane, Edmond Hamilton and Sheldon Moldoff, first appearing in Detective Comics #233. (1956)