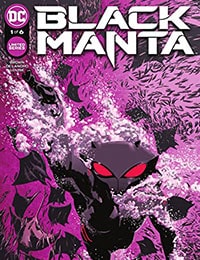 Following his appearance in the Aquaman 80th Anniversary 100-Page Super Spectacular, the scourge of the seas now gets his own series. Black Manta is chasing a rare metal with incredible powers, and he's not the only one who wants to get his hands on it, friend and foe alike!