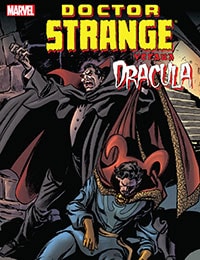 Collects Tomb of Dracula #44, Dr. Strange (1974) #14, 58-62. It's the Sorcerer Supreme against the Emperor of the Undead! Dracula wants Earth to fall under the spell of the Darkhold, but Doctor Strange has joined Blade and the Nightstalkers in a quest to vanquish all vampires! See the origins of vampirism itself unveiled! Guest-starring the Scarlet Witch and NEXTWAVE's Monica!