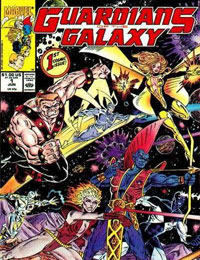 In the First issue of the series we find the team, Nikki, Vance, Charlie, Yondu, Martinex and Starhawk, engaged in battle with various robotic weapons. We learn they are on the planet Courg and that the technology was put there by the Stark a race who worships Tony Stark as their god. We get a breif recap of the GotG past and after a brief battle with Taserface a scout for the Stark they encounter an entire Stark war squad!