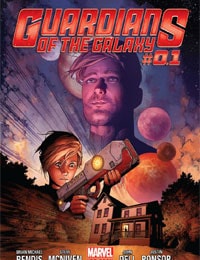 Guardians of the Galaxy (2013) Average 1.00/5 - out of 1 total votes.
Follow 1 Followers
Read from beginning Read the latest

The Guardians of the Galaxy is a group of heroes who opposed the Phalanx conquest of the Kree system (and many who had opposed Annihilus' incursion into their universe), and banded together in an attempt to prevent any further catastrophes from ever occurring. On the recommendation of ally Nova, the group established a base of operations at the space station Knowhere, which conveniently possessed a teleportation system with near-universal range. An intelligent, super-powered dog called Cosmo acted as Knowhere's chief of security and worked closely with the new team during their first missions.