His Name Was Ptirou Comic 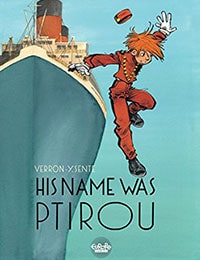 .The best part of Christmas is getting to hear one of Uncle Paul’s stories. This year, Uncle Paul treats the kids—and us—to the story of the real-life boy who inspired the beloved Spirou.
It’s 1929. Ptirou is a circus acrobat who, while the world’s economy is crashing, sees his own world fall apart. Orphaned, and possessing only his skill, a bottle of perfume, and an inherited dream, Ptirou sets out for New York and new adventures. With saboteurs on one side, the lovely Juliette on the other, and his own knack for mischief, Ptirou finds adventure aboard an ocean liner before it’s even left port.