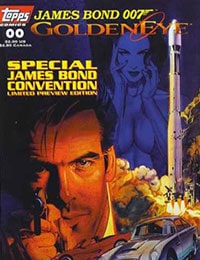 This is the adaptation of the hit movie that brought James Bond back into the spotlight after seven long years! A Russian satellite weapon is stolen, alongside a newly developed helicopter, and James Bond is the only one that can stop the organisation behind these thefts!
But, will the revelation of the identity of the group's leader hit harder than Bond could ever expect? And, can he escape the clutches of the glamorous assassin working for his foe, a woman who'll stop at nothing to give him a good squeeze?
This series, intended to be three issues, was cancelled after a single issue (not counting the preview issue #0). It's still unclear why the whole series wasn't released and to date the two other intended issues have never been released.