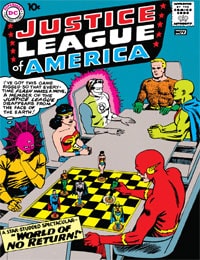 Superman! Batman! Wonder Woman! The Flash! Green Lantern! Aquaman! The Martian Manhunter! The Justice League of America in its very own series! But will their first adventure be their last? Featuring the first appearance of the mind-controlling villain Despero!The Flash must rescue his fellow JLAers from Despero, the alien dictator from another dimension. But can even the Scarlet Speedster find a way to rescue his comrades from "The World of No Return.