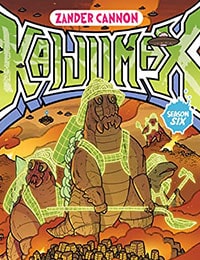 IT'S THE END OF EVERYTHING! FINAL SEASON MEANS...FINAL JUMPING-ON POINT!! From across the galaxy, a terrifying alliance of alien warships enters our atmosphere. Luckily for the Earth's human population, they have a prison full of monsters that they can strong-arm, blackmail, and guilt-trip into battling for free. Inmates of both Kaijumax prisons suit up for the filthy, dangerous work of (giant) first responders, in a bid to lessen their sentences. Zander Cannon's Kaijumax is an incisive, darkly satirical take on just about everything—including the prison-industrial complex, drug abuse and addiction, deadbeat dads, regret, the lies we tell ourselves, and...Kaiju! Giant bug-eyed cops! Memes! Combiner-mechs! Satan! Pocket Monsters! Elder Gods! And a LOT more!