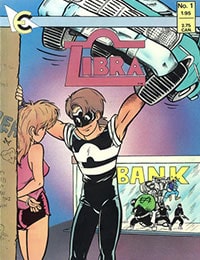 A new young superhero has appeared in the city: Libra! Dale, the son of the previous Libra wants to have fun using his superpowers and enjoying his few minutes of fame. However, reality kicks in and his series was cancelled after one issue. Libra appeared in a crossover with Shuriken in Shuriken Team Up and disappeared forever after this.