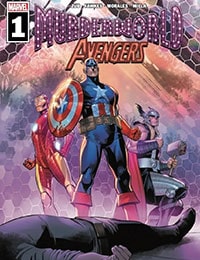 READY. SET. DIE! Hundreds are killed every year in an elaborate secret tournament run by a sadistic man with nearly limitless resources at his fingertips. It''s not an urban legend. It''s not a myth—MURDERWORLD is real! It''s online, and the gruesome truth has been hidden from everyone except its victims—until NOW. Meet Paul Pastor, the extraordinary young documentarian who''s going to expose it all…with some super-powered help. The Black Widow has a personal grudge to settle with Murderworld mastermind Arcade—but can she stop this game before it kills again? MURDERWORLD is the wildly violent ride you''ve been waiting for. Gut-wrenching twists, unbelievable deaths, the Avengers bloodier than you''ve ever seen them before—the tormented minds of Jim Zub (Conan the Barbarbian, AVENGERS), Ray Fawkes (One Soul, Constantine) and Jethro Morales kick off the must-have miniseries of the year!