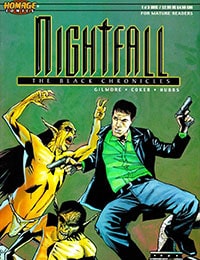 A gripping tale of supernatural menace and gripping horror reveals monsters living among us! As a member of the paramilitary paranormal police force known as the Nightwatch, Mason Black devoted his life to fighting the hidden monster underworld. But the Nightwatch had corruption at its very core, so Mace did what no one had ever done before: he quit. Now on his own, he faces a deadly threat in New Orleans: an evil that threatens to destroy both the Nightwatch and the human-monster truce they defend. Can Mace unravel the truth in time? For more information, see the feature article.