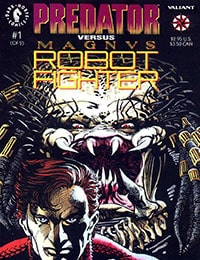 Variant cover: Platinum version (see below).
A Predator stalks North Am 4001, searching for his most prized trophy -- the X-O Manowar helmet. The stolen trophy has fallen into the hands of a certain Goph, a man called Magnus, whose steel-mashing strength has earned him the title Robot Fighter -- thus the stage is set for the battle of the 41st century!