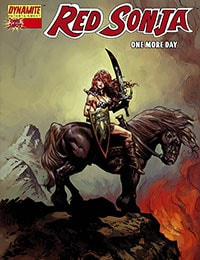 A special red Sonja one-shot featuring the writing team of Jimmy (Batman Punisher Conan) Palmiotti and Justin (Batman Punisher Conan) Gray along with artist Liam (Hulk Death Dealer) Sharp! In One More Day Red Sonja leads a rag-tag army against their oppressors and finds honor courage and death on the battlefield! The armies of Graven Sul campaigning across the known lands are feared throughout the world for their brutality. To them all that matters is conquest for their lord to burn every kingdom from the face of the earth and leave no survivors. As a battle rages and all hope is seemingly lost one brave warrior a she-devil with flaming red hair rises to the call of King Varick to aid his men and save his throne. All that stands between the kingdom of Varick and Graven Sul is Red Sonja.