Return of the Monsters: Phantom Detective vs Frankenstein Comic 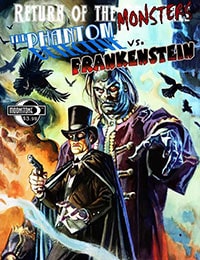 One of the greatest crimefighters in pulp history crosses paths with the most iconic monster in all of pop culture! Frankenstein's monster is on a rampage in New York, leaving a trail of destruction and dead bodies in his wake, but before the Phantom Detective can stop him, the World's Greatest Sleuth must contend with the insidious, occult Nazi brotherhood known as the Order of the Black Sun!