Run For It: Stories of Slaves Who Fought for Their Freedom Comic 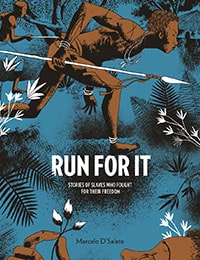 Run for It—a starkly stunning graphic novel by internationally acclaimed illustrator Marcelo d’Salete—is one of the first literary and artistic efforts to confront Brazil’s hidden history of slavery. Seen through the eyes of its victims, Run for It tells of ordinary slaves who rebel against their masters. Run for It’s vivid illustrations and magical realism engage the reader’s poetic imagination through stories of individual suffering caused by the horrors of slavery.
Originally published in Brazil—where it was nominated for three of the country’s most prestigious comics awards—Run for It has awed readers worldwide. These intense tales offer a tragic and gripping portrait of one of history’s darkest corners. It’s hard to look away.