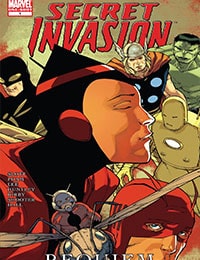 Janet Van Dyne is dead. She was the only important casualty in the Skrull invasion, at least to those who love her most. She may be gone, but she will never be forgotten by her friends, comrade in arms, fellow Avengers. But no one is more devastated by her death than Hank Pym, her husband, who returned to Earth just to realize that he lost Janet forever. Witness the birth of a new Wasp, as Hank Pym adopts the super hero identity of the woman he loved.