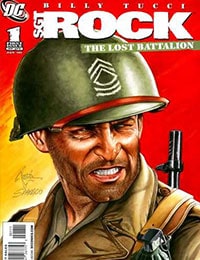 Billy Tucci took on both the writer and artist roles to return Sgt Rock and Easy Company to action.Tucci's six part story was based on the true story of the last stand U.S. infnatrymen trapped behind enemy lines following the Omaha Brach landings of World War II. Tucci blended real life facts with tough war action to create something extra special, as he told the story through the eyes of a cartoonist crossing paths with Sgt Rock, providing a different take on DC's greatest war hero.
The story opened with a drawing of Rock in the style of Joe Kubert, the artist most closely associated with the hero. The series' fact-based background led to it featured in the Army Times - a weekly newspaper for U.S. Army personnel.