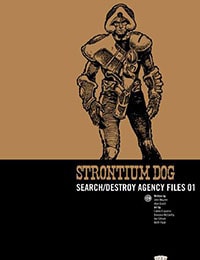 Earth, the late 22nd century. Following the atomic war of 2150, Britain has been devastated by nuclear holocaust. The survivors rebuilt their lives, but many were warped by the mutating effects of Strontium 90 fallout. Unable to live or work amongst the ‘norms’, mutants were forced to grow up in ghettos and take the only job open to them – bounty hunting. These Search/Destroy Agents hunt the criminals too dangerous for the Galactic Crime Commission. One such Strontium Dog is Johnny Alpha, whose eyes emit piercing Alpha rays and enable him to see through solid objects - and into men’s minds.
Now in this first volume collecting together all the Strontium Dog adventures from the beginning you can join Johnny, his norm Viking partner Wulf Sternhammer and alien medic The Gronk as they fight their way through a universe of violence and prejudice!