Strontium Dog: The Life and Death of Johnny Alpha: Dogs of War Comic 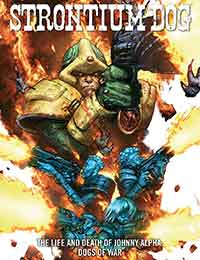 MUTANT VERSUS NORM IN A BATTLE OF SURVIVAL!
EARTH, THE LATE 22ND CENTURY. MANY SURVIVORS OF THE DEVASTATING ATOMIC WARS WERE MUTATED BY STRONTIUM 90 FALLOUT. These ‘mutants’ became a victimised underclass – hated by the ruling ‘norms’ and forced into squalid ghettos, the only job left for them was bounty-hunting.
Renowned Search/Destroy agent Johnny Alpha died defending mutantkind from the tyranny of the human race. Now he’s back, as ruthless as ever and fully prepared to conquer his enemy at all costs!
This gut-punching slice of sci-fi action is brought to you by original Strontium Dog creators John Wagner (A History of Violence) and Carlos Ezquerra (Judge Dredd).