Strontium Dog: The Life and Death of Johnny Alpha: The Project Comic 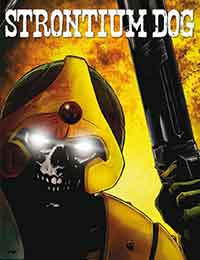 EARTH, THE LATE 22ND CENTURY. Many survivors of the devastating Atomic Wars were mutated by Strontium 90 fallout. These ‘mutants’ became a victimised underclass – hated by the ruling ‘norms’ and forced into squalid ghettos, the only job left for them was bounty-hunting.
The best of the Search/Destroy agents (also known as Strontium Dogs) was a man called Johnny Alpha. He became famous for fighting for mutant rights and died defending his kind from ultimate destruction.
But it seems that even death can’t keep a good dog down and rumours are circulating about Alpha’s return...
The Strontium Dog is back, courtesy of original creators John Wagner (A History of Violence) and Carlos Ezquerra (Judge Dredd). This collection also includes a bonus What If...? story written by Alan Grant (Batman).