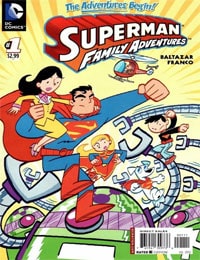 The story opens with Superman destroying a meteorite and saving Metropolos. Superman rushes back to the Daily Planet to find Perry White yelling for Clark Kent. Then giant robots attack Metropolis and Clark must change into Superman to save the city.
It turns out that these robots are quite powerful, luckily Superman's family shows up to help him.The robots are being controlled by Lex Luthor, but the robots are just to allow Alex to steal Superman's powers. However Lex steals Krypto's powers instead, which causes Lex to act like a dog. Will Superman and his family be able to restore Krypto's powers?