Superman vs. The Amazing Spider-Man (1976) Comic 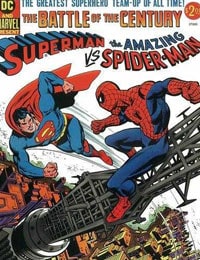 Superman vs. The Amazing Spider-Man (1976) Average 4.00/5 - out of 1 total votes.
Follow 0 Followers
Read from beginning Read the latest

The Battle of the Century. This is an issue you can't miss! Superman and Spider-Man have met for the first time! Lex Luthor teamed up with Doctor Octopus and Only the two most powerful and popular heroes will have to save the city at all cost! Superman from Metropolis came to visit New York City to do some report by The publisher editor-in-chief Mister White, While Spider-Man had been doing his same job in the bugle as always getting yelled by the publisher editor-in-chief J.Jonah.Jameson. When Superman and Spider-Man met in the Empire State Building, it was a shock to see them like this. While Lex Luthor : Superman's arch-nemesis and Doc Ock : who is Spider-Man's enemy came to team up to defeat Spider-Man and Superman. It is up to Superman and Spider-Man to defeat Lex Luthor and Doctor Octopus and their robots and the battle of the century begins!! First when they met, Superman had a fight with Spidey in the Empire State Building but mostly in a construction site.