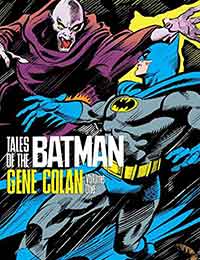 For the first time, DC Comics collects the moody Batman stories drawn by comics legend Gene Colan. These never-before-collected tales from the early 1980s spotlight the art of comics legend Gene Colan. Known for his moody, shadowy illustrations, Colan was a natural fit as artist on Batman when he came to DC in the 1980s. His run of stories in the pages of both BATMAN and DETECTIVE COMICS included appearances by some of Batman's greatest foes, including Man-Bat, The Monk, Rupert Thorne and more. Collects BATMAN #340, 343-345 and 348-351 and DETECTIVE COMICS #510, 512, 517, 528 and 529.