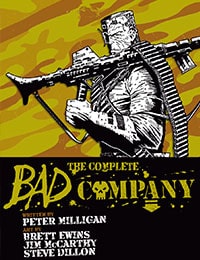 THEY LIVE TO KILL KROOL!
The human race is at war with the fearsome Krool. Battling for control of the planet Ararat, the humans are facing defeat against the ruthless alien hordes and their army of war zombies. New to the 1st Colony Division, soldier Danny Franks thought that he had truly experienced the horrors of war – and then he met a group of ruthless renegades and their lethal leader Kano. More horrifying than the Krool enemy, they are Bad Company!
This epic future war tale comes, collected in its entirety for the first time, from the wild imagination of Peter Milligan (Shade the Changing Man), with stunning art by Brett Ewins (Johnny Nemo), Jim McCarthy (Bix Barton) and Steve Dillon (Preacher).