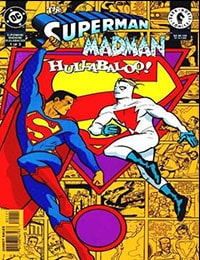 The Man of Steel meets the Man of Madness as two of comics' most unique and revolutionary heroes cross-over (and how!). In each of their respective universes, Superman and Madman are involved in scientific experiments, the results of which propel the unsuspecting superbeings into one another's world. The only thing is, each takes half of the other with him -- creating two confused heroes and one big Hullabaloo! It's wackier than red kryptonite and more bizarre than Bizarro when two worlds get an even stranger visitor from another planet -- Supermadman! And it doesn't stop there, because unexplainable things begin happening all around them. So the unexplainable has to be explained and the impossible made possible.