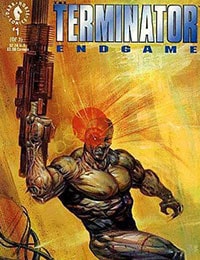 This is the big one: the last of Dark Horse's Terminator series. And what a way to go! In this final three-issue series, Skynet sends a big brawling mother of a Terminator from the future to change the past. His goal: to prevent the birth of John Connor, even as Sarah goes into labor! The rebel alliance is reduced to Colonel Mary Randall, the one woman who might save the future but at what cost to the present? Written by James Robinson, this series ties up all the loose ends from previous Terminator storylines while bringing us to a slam-bang finish. Pencil artist Jackson Guice (Nick Fury: Agent of SHIELD) and inker John Beatty join forces to create powerful interior art; British artist John Higgins (The Thing from Another World) supplies the cover painting.