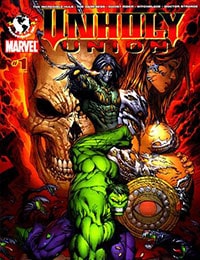 The biggest Top Cow/Marvel crossover yet crashes into stores in July! Bringing together The Darkness and Witchblade along with no less than three Marvel superstars, this crossover is going to bring the house down! Every mob boss needs a competent lawyer. Jackie Estacado's hired a great one (even though he does happen to be blind). But even if Jackie can beat the rap, the Spirit of Vengeance is not so easily satisfied. As if a battle royale between The Darkness and Ghost Rider weren't enough, this special features The Incredible Hulk rampaging through New York City, both the current and former bearers of the Witchblade, and even an appearance by the master of the mystic arts, Doctor Strange. A stand-alone story that nevertheless sets the stage for Top Cow's First Born event, this is a tale in which all hell breaks loose literally!