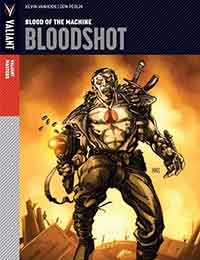 Once, he was the hired killer known as Angelo Mortalli. Now, there is only Bloodshot. Brought back from the grave by the government scientists of Project Rising Spirit, Bloodshot is powered by microscopic nano-machines that can repair all injuries and maximize his physical potential. But the nanites cant replace his lost memories - or help him shake the feeling that he was once anything but a hero. Atoning for his sins in a world he no longer knows, can the man now called Bloodshot recover the secrets of his past? And survive his deadly first encounters with the likes of the Eternal Warrior, Ninjak and Rai along the way?
Collecting Bloodshots best-selling debut with the original series coloring, the inaugural Valiant Masters volume re-presents Bloodshot (1992) #1-8 by fan favorite writer Kevin VanHook and comics legend Don Perlin for the first time anywhere! Plus no fan will want to miss The Tablet - a brand new tale of the VH1 Valiant Universe starring Bloodshot and the Eternal Warrior by the classic creative team of VanHook, Perlin, and Bob Wiacek!